← Silent Sunday after the fun!
Bulmers →

Yep Purple Majesty Potatoes!!!
Ok Who decided that grass should be called green? Who said that the sky is blue?  Why is mud coloured brown? A banana yellow? A strawberry red? I can go on!
Who made the decision to call these things these certain colours? I’m not sure anyone can answer that (but i’m sure some will try!)
I’ve heard about them for a while but never seen them & now my local Sainsbury’s has started to sell them on behalf of the wonderful Albert Bartlet.
I decided to get them whilst they were only £1 a bag for 1.25kg
Here they are pre-peeled! 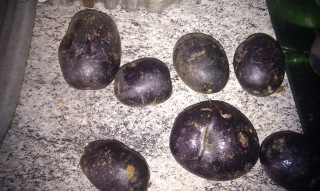 I did find on peeling them that the purple “leaked” a bit but not too badly, although it was harder to see where you had peeled cos of the colour!
Peeled! 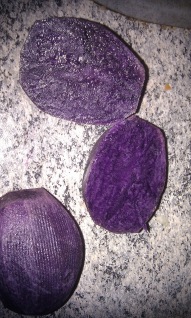 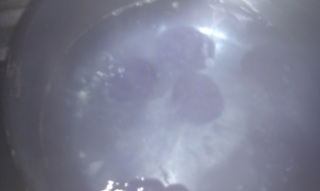 Yep on putting them in the water it went a strange colour as you can see better from the 2nd picture below! 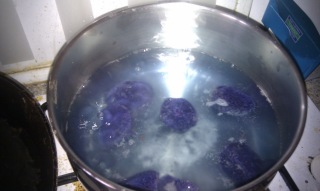 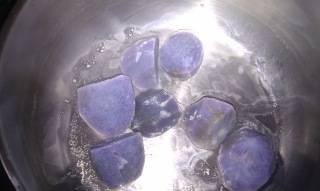 I’m not sure i’d fancy them just boiled on my plate for dinner! 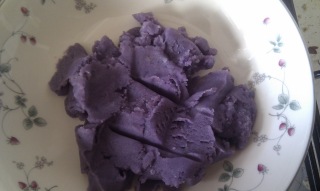 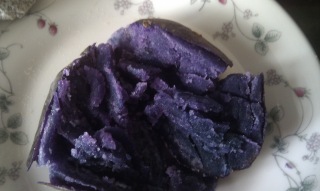 Ok it looks really odd & I know they say we eat with our eye’s & it’s true, I’m really not sure I could serve these potatoes up with a Sunday roast, I know the others would turn their noses up at them!
My stepson walked through the kitchen just as I’d finished doing them & wondered what it was so made him taste it & tell me what it was ………….
” Well it tastes like mashed potato but looks really odd, this is really strange cos you know what your eating but it’s not right eating purple spuds.”
We both said that the mash looked like it should be sweet like a fondant etc not a savoury food. It’s definitely not something that you would serve up as a typical dinner & not expect some comments about it & maybe it may even be left on the plate.
A potato is creamy yellow inside & not purple & we’ve been told the way we should be eating it & this is a totally new concept.
Ok these could be really good in getting kids to try new thing’s although i’m sure there aren’t many who don’t like mash spuds.

For me & mine i’m sorry but i’ll be sticking to my traditional spuds from now on but might buy these if I want to freak people out & totally confuse their senses!!

← Silent Sunday after the fun!
Bulmers →